Mini games are those extra features the main game possesses to allow players to take a break from the main game flow and play a fun and short but rewarding extra activities in game. Most of these mini games are designed to reward the players with bonuses, new items, gold or money, or even experience stat gains which are very essential to advance into the levels of the game.

One game example that really took mini-games into a new level is the Mario Party series of games. Mini games are actually what drives Mario Party to be a great charm for the whole family seeking a fun game play time together. Essentially Mario Party is a sort of board game in which your goal is to collect the Millenial Star (randomly placed somewhere on the board) and gather enough coins to win. You compete with your family or friends through different kinds of mini-games, sometimes you go solo playing a mini-game, but basically the better you perform the better chance you got on earning more money than the other players and eventually winning the race. 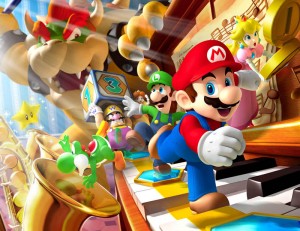 Most Mini Games in Mario Party are well designed, and are really great and challenging to play even if you are going allies or going head to head against  AI’s in this game. To see the lists of all Mario Party Games Mini Games click here. Some mini-games in Mario Party though have some difficult control settings (like repeatedly tap certain button as fast as you can) which can be a little hard if you are competing against the AI in this game. Also some AI cannot adequately perform certain roles in mini games which is annoying if you are on its side.

Now lets move on to RPG’s. In a Role Playing Game, mini games are also a plus feature, players seems to enjoy extra curricular activities they can do in games, things that allow them to enjoy a different type of game play, for example in Final Fantasy 8 there is a trading card type mini game which I enjoyed spending time playing with, not only that it is fun but it is also rewarding at the same time.

RPG’s that had Mini games do have so much advantage over an RPG which doesn’t:

One paradigm that shows the complete usefulness of mini side games is the application of Resource gathering stat or skill in Role Playing Games which are great additional feature that most developers seem to incorporate in their games nowadays, this enables the player to enjoy playing other types of gameplay while accumulating beneficial results upon engaging to such activities, these basically introduces the player to gather resources like wood, ores, herbs, or minerals to eventually turn them into useful items such as weapons, armors, potions,

These following simple mini game mechanics examples or drafts I’ve made were intended for Eventide RPG as mini game extra activities particularly designed for resource gathering skill in the game.