Yet Another Tradnux Animator Updates

Yet another update has in store for those who are looking forward to the completion of my Tradnux 2d Pivot Animator tool. The last update has been reported to having lots of bugs in it, especially on Windows XP users who are experiencing major issues upon loading a TSF file, it may have been caused by the saved binary format  of the TSF data file being corrupted when opened using a 32 bit Windows XP, I have been developing this tool using Game Maker Standard on the Windows 7 64 bit OS.  I have replaced the functions responsible of writing/reading data file with a better library, now it seems to be working well regardless of windows version you’re using. Further testing needs to done though that’s why I have released this new version which is still in RC beta status.

Another update in the program is the GUI skin, a little bit of change on the appearance. To tell you honestly I have mixed feelings with this change, I thought the last version has a cleaner look, but that was just me…. some may find this new look likable. Also, I have redesigned the logo/icon, as well as the ‘about’ splash image. They will be so up to the releasing of version 1.o. 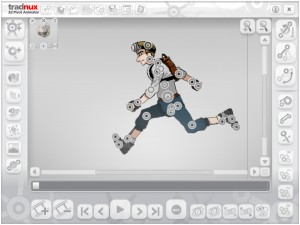 In addition to the updates, is the inclusion of a new button on the left panel bar. The “Flexi-mode” toggle, it changes the way the sprites behave, for example toggling it to the first mode will make the sprites stretch itself according to it’s bone length. Pretty neat stuff when you want to get some elastic effect on your character animations. All about this new feature is documented in the help info (f1 key).

Another addition are the activated buttons for splining the animation frames. The “Spline single” and “Spline all” buttons allows you to smoothen the animation from frame A to frame B. The program automatically repositions and adjust angles of the in-between frames therefore creating smoother blend of animation. Another useful addition is the “Delete” sprite, this is a very important update because it allows you for example to delete an incorrectly assigned sprite to a node point. This button is available in the Sprite Adjust Box (appears when you click on a node point that has sprites on it). Also, dragging a supported image file (from windows explorer) to the Tradnux screen will automatically create the new point with that sprite in it… nifty stuff eh.

But the biggest update would be is the finally working export functions, the button “REC” is now fully functional. Along side this is the addition of auto-cropping feature which takes place when you are about to export the animation. The program automatically adjusts the cropping area to where the animation happens in the stage space, you can also adjust it yourself and then confirm it. Once done with the cropping, you can select three types of output; Sequenced PNG Images, Strip Sheet PNG Image, or Animated GIF  (and exporting to AVI video will be supported soon also).