What Makes a Game Scary?

I am an avid fan of games under the horror genre and have played considerable amount of countless hours from game title to another. A number of the most popular horror games I have played has inscribed in me that spine-chilling experiences I will never forget and those memories keeps me wanting for more to feed my hunger for fear. I don’t know why we wanted to be scared, maybe it’s our way of conditioning our minds to challenge our inner most nightmare by playing these horror video games.

So I was thinking what really makes a game scary? why do most of these horror games are so effective in striking fear in us? Well, let me compile a list of what I think makes games scary according to my gaming experiences playing them.

Most of the games that gives me the creeps have these worldly but dark and demented game visuals that are so devoid of happiness and human regularity. Often these game worlds features oddities and strangeness you just find hard to understand which renders you in a paradoxical state of curiousity and fear at the same time.

The most common buildings or places you can always find in horror games are old castles, towers, farm, barns, old houses, tunnels, etc. But in truth, you can always turn an everyday regular locations into a nightmarish place of horror by turning its color to a dark, less-vivid, rotting, cold and foggy atmosphere, put in some time-tested horror elements such as a full moon, haunting clouds sky, strange sounds, dead bodies and what not, the key is to make the world devoid of its former glory but a dark strange residual demented version of it. Put some tiny really strange features all around it (like put creepy objects like creepy paintings, or even 3 full moons in the sky perhaps?) to make an impression that your character is the only normal person living in the game. 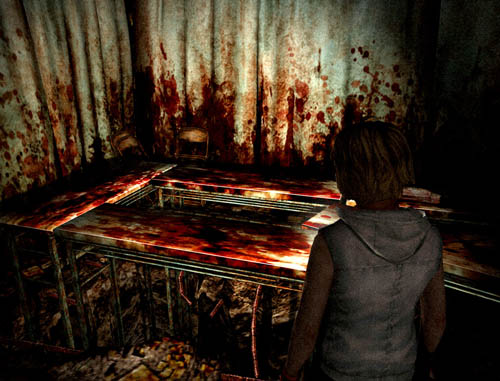 When it comes to sounds the background music is an important factor in setting the tone of the game. My favorite example of a game that features that really haunting background music is the Resident Evil series. If you have played Resident Evil games I’m sure you are with me when I say that one of the most constant frightening experience in this games is when you’re reading those distressful notes and diaries left behind by some human entities telling you about the strangest and deadliest of creatures or the horrible fate that awaits you… while the haunting music is playing on the background… that really gives me the chills. Add to it some creepy sound effects and you got a game package designed to scare its players.

Do not overdo sound effects and background music though, you need to maintain the amount of silence depending on the player’s situation in the game, for example when the player just walking around trying to find something to focus on just dim the background music enough, but when suddenly encountered a creature you can intensify the background music and apply appropriate sound effects. This is the perfect opportunity to create sudden jumps to help drive the sudden tension of game experience you want your players to feel.

Another significant element in horror are the scary creatures the developers deploy into their games. Creature designers are the fellows who conceptualize these morbid creatures to their virtual life in game. Most creatures are intended to look disturbingly deformed and harmful enough to make the player frightened. Now let’s see these existing creatures that gave me sleeping difficulties during my gaming lifetime playing some of the popular horror games.